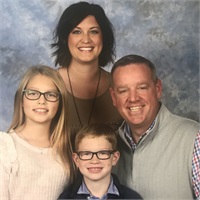 Ever since he was a child growing up in Western Kentucky, Cory Samsil believed strongly in service to people -- his family, his neighbors, his friends and the wider community.

The way he sees it is that helping others is a natural part of belonging to any group of people. In fact, he's convinced that you can't run a business properly in a place where you don’t know the people. Home, where you grew up, just makes commonsense of where you choose to work.

And as he grew, graduating at Murray State, he was inspired to take on a role of helping to educate young people, teaching at Mayfield.

Education has always been important to him -- and he carried his strong commitment to simplifying, explaining and helping others understand when he decided to move into the financial management and investment industry 15+ years ago.

But even as he did this, he became aware that most people, the average joes of the community, were often underserved in many ways.

The finance industry, he noted, tends to target deep pockets. But who looks out for the financial wellbeing of everyone else? Few, if anyone.

He decided he wanted to focus on helping people intent on making the most of limited income and savings, people who were more concerned about their long-term ability to pay for essentials than about buying luxuries.

The idea -- which became Cory's Guard Your Groceries process -- echoes his moral and family values and his ongoing commitment to being an educator.

Even in his role as creator of the Guard Your Groceries retirement process, he sees himself as a teacher, not a salesman.

His strong faith as a member of Lone Oak Baptist Church, where he’s also a teacher and Finance Committee Chair drives his sense of service to others. Cory is also an Executive Committee Emeritus Member of Sunrise Children’s Services Inc, the largest faith-based childcare provider in Kentucky.

Alongside this, he plays an active role as a husband and parent, married 15 years to Niki, with two children, Lexi and Cooper.

In social and business life, he's known for his friendly and approachable manner, backed by solid expertise and experience.

Cory says: "I'm a down-to-earth type of a guy, casual in appearance and approach, but structured and professional in delivering what my clients need. I know this area and its people."

Cory Samsil is a licensed agent for annuities, life insurance, disability insurance, medical insurance, securities and investments. He is a Chartered Retirement Plans Specialist (CRPS) through the American College.

He graduated from Murray State University and is licensed to sell health and life insurance in Kentucky and to sell securities in Kentucky, Tennessee, Missouri, Illinois, and Florida.